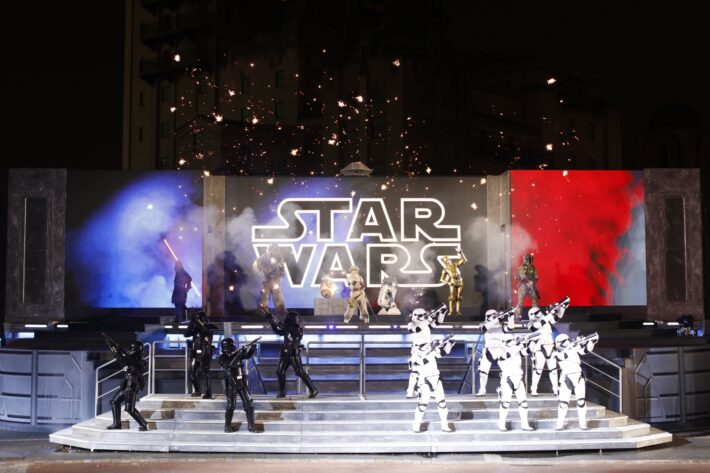 Low season is a double edged sword at Disneyland Paris. On one hand you can benefit from the lack of crowds, ultra small wait times usually dominate the attraction queue board and, best of all, hotel and travel rates tend to be at their lowest. This does comes at a cost though with poorer weather compared to the rest of the year. To combat the new year lull and entice guests to return in the quietest times, Disneyland Paris reach out to their favourite of campaigns of recent times, the seasonal celebration. Though they have always been a thing in one shape or another when it comes to Halloween and Christmas, the idea of non-holiday specific events really took off with Swing Into Spring. Since then we have seen seasons dedicated to individual IPs, entire franchises and genres and even an epic battle between the Mouse’s two most popular merchandise lines.

This January has been no different with the launch of the brand new season Frozen Celebration and the return of Legends of the Force – A Celebration of Star Wars. Though this is not the first time two seasonal celebrations have shared the resort limelight (just last year saw Legends pair off against Betty Rose and Jimmy Ocean in a memorable battle for guest attention), this year does hold an, albeit unfortunate, title. This is the first time two seasons have ran concurrently which have both been panned.

Coming off the back of the mega successful Frozen II, the newly created season should have been a dead cert for acclaim. Instead it has struggled with a lack of content and focus, feeling emptier than an unfurnished ice palace compared to all that has come before it. Even those who enjoy the sole entertainment piece on offer concede that it is short, messy and not remotely enough to make up a season.

It really is quite telling that, a season that has seen cuts and repeated criticism for a lack of things to see and do, Legends of the Force next door feels like a bulkier event in comparison to Frozen. The saving grace in what is to be its final outing in Walt Disney Studios Park are guests who reluctantly shrug “Well, it has more going on than Frozen Celebration.”

Despite being built upon a sometimes infamously passionate fanbase, one known to berate and brandish their lightsabers toward any sort of civil unrest, there has been no fanfare of the reveal that Legends will be ending permanently. A few pockets of resistance may have been felt by those but the majority – a vast majority – is happy to see it tossed to the wayside.

These two factors has provided me with a curious question. Have Disneyland Paris’ seasonal celebrations run their course? Is it time to drop this platform of entertainment segregation and retire it to the vault of history?

Don’t get me wrong, these temporary events have their fair share of benefits both for guests and the resort itself. The lure of a festival or event dedicated to a popular franchise or theme is enough to encourage those interested to visit during a time they normally wouldn’t such as in the Winter or Autumn. It also helps promote the idea of repeat visits in the same year to catch everything going on at both parks. DLP have taken the modern day conundrum of ‘FOMO’ and ran with it.

From a less cynical and more creative viewpoint, these events also provide ample opportunity for representation to IP and ideas not already present within the resort. The mammoth franchises of Frozen, Marvel and Star Wars being top examples of this, who for too long were neglected by DLP just as their popularity either reached fever pitch or the resurgence in their fame grew.

Soon though there will be no need for current ‘Big 3’ of the Mouse to have these festivals to prop up their park content. The next few years is set to see all three completely transform the landscape of Disneyland Paris and more specifically the Studios in its €2 billion expansion. Starting with Avengers Campus next year, the second gate will see fully fledged, dedicated lands to each, with work soon beginning on bringing Frozen and Arendelle to life.

This quite nicely leads me onto the biggest downside to seasonal events and what a has perhaps shaped their downfall, the budget. The Walt Disney Company are no doubt one of the biggest and most successful companies on earth. They’re a company have the ability to quite literally throw money at a problem until it is fixed and purchase assets should they find them desirable. That doesn’t mean they are frugal with their resources and allocation. As much as we think Disney Parks has a bottomless pit of funds to achieve anything they want to, that isn’t the case.

Budgets and resources need to be used wisely and within the best interests of the respective resort in the long term. That means only so much will ever get spent, be that time, people power or just plain Euros and Dollars, for something that is ultimately a temporary addition only a fraction of the paying audience will see for a limited run in the year.

We saw this in action just last year with the addition of The Lion King & Jungle Festival. There is no doubt that season is superb, with critical acclaim all around. Even I had to rank it as my No.1 moment of the year with no hesitation. That season was so sublime thanks to all that went into it. The fantastic choreography, story and music of The Jungle Book Jive, the beautiful costumes and staging of Rhythms of the Pride Lands. The surprising frequency of Timon’s MataDance making it feel like a natural musical party. That all came to a heavy cost.

With a significant chunk of resources going into the research & development, creation, maintenance and running of the Lion King season, other seasons had to feel the pinch. Halloween was the first to experience this with no true additions other than a lacklustre replacement on the castle stage. Following this was a corner cut Christmas that to many felt less festive compared to previous iterations.

Stagnation and reduction are words no Disney Parks fan wants to hear when it comes to standards in the park. No element of the experience, be that an attraction, a show, an entire season or just general tidiness of the park should be below par in the eyes of the guest. As the late Disney Legend Marty Sklar once said, “Today is the only day many people will ever visit one of our parks”. Quality should never be scrimped one day in favour for another. Every day should be the best day it possibly can be, so if something isn’t reaching the standard that guests (and Disney) expect, it shouldn’t run.

Clearly we have reached a state where the number of season celebrations on offer at Disneyland Paris during a year is too great. In a quest for more things to have going on and more reasons to visit, the value of these events have diminished and are now turning people away from visiting.

Maybe it is time for these ‘short in length, high in frequency’ events to become a thing of the past. There is no denying this type of strategy has its success stories and that shouldn’t be understated. I, along with so many others, have some wonderful memories from some of these seasons when they reach their best. As Disneyland Paris continues to naturally evolve so too does the average theme park goer and their expectations. I think it may now be time for a new era.

The late 00’s and very early 2010’s could be seen as the origin to seasonal celebrations, a time where the idea of a temporary celebration was first adopted but for an entire calendar year. No doubt based of the monumental success of the 15th Anniversary in 2007, management hoped to keep that momentum alive every year with a dedicated reason to visit.

Alas it didn’t prove to be that ‘lightning in a bottle’ they hoped for as the likes of Mickey’s Magical Party and the New Generation Festival failed to garner the same response the milestone anniversary did before it. Perhaps it is time for this idea of an extended celebration to make a return. While it is true the first attempt proved to be a stumble, under the right theme, content and effort, it could really be a success.

The prime target for this of course would be the resort’s golden boy right now; The Lion King & Jungle Festival. What if, rather than reserving it for the June to September timeframe it currently occupies, the season became an extended, year long affair? It is already established that the season is a winner with guests and fans and with no other seasons to worry about (aside from the mandatory Halloween and Christmas) it would free up that budget to explore more creative and wonderful ideas.

For a season like Lion King & Jungle, which relies so heavily on the good summer weather for its show, this of course means it would have to adapt to accommodate the harsher conditions of Winter and Spring. Something that would be entirely possible thanks to the larger number of resources by being a sole seasonal celebration. Just imagine, we could have the outdoor extravaganza of The Jungle Book Jive in the height of Disneyland Paris’ sunshine, with unique and just as fun indoor entertainment bookending the year at either end, all under the umbrella of the one celebration.

There is a third option, though. One where these seasons are scrapped for good an in their place selected shows and entertainment become permanent fittings into the Disneyland Park and Walt Disney Studios Park itinerary. This would be an option best suited for the indoor stage productions like Rhythms of the Pride Lands and Marvel’s Super Heroes United. The fact that the magnificent, and very costly, theaters in Production Courtyard and Frontierland go the majority of the year unused is criminal. What better way than to utilise them than with the shows quite literally made for them?

Outdoor entertainment however is where this idea starts to fall apart. As exciting as it may sound to have the likes of Baloo and King Louie Jungle Book Jiving all year round, or the Avengers saving the day every month of the calendar, it just isn’t realistic in the Parisian climate. Last year saw exactly this when the Festival of Pirates & Princesses came to the cold of Winter and struggled to keep performances above half operation most weeks. No, if a more permanent solution where to be taken with the end of seasonal celebrations, I feel it would spell the end of these outdoor shows or at the very least keep them in the timed exclusive limbo they current lie in.

What do you think? Is it time to hang up seasonal celebrations at Disneyland Paris after a near decade of short term fun? Do you think there is still a future for these sort of events in the resort or is there an alternative to be found? I love to hear others’ ideas so be sure to let me know over on Twitter!